Mrs. Olsen (either daughter or daughter-in-law)

Herbert Olsen is Matt Olsen's grandfather. He owns a pet store in Heatherfield.

After her dormouse ate too many cookies, Will took him to Herbert Olsen's pet shop for treatment. While she was there, he offered Will a part time job in his shop.[1]

He and the store have partaken in fairly frequent supernatural activity, such as when Elyon Brown used her powers to unleash all the animals in the shop to intimidate the Guardians[2] or when Shagon attacked the store to get at Will.[3] 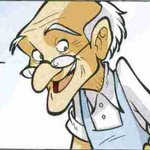