Irma Lair is a fictional character in the W.I.T.C.H. comics and the TV series of the same name. She is one of the five teenage girls who are chosen to be the new Guardians of Kandrakar. Their mission is to protect Kandrakar, the center of the magical universe, and the other planets from evil.

Irma is a 13 year old teen, who is in eighth grade in season 1, and ninth grade in season 2 at Sheffield Institute. She has light-brown, slightly wavy hair and greenish-blue eyes. Her birthday is March 13, and her sign is Pisces. She is voiced by Candi Milo.

As the Guardian of Water, Irma controls water as well as having other advanced powers. Her theme color is turquoise and her symbol is a blue wave crest.

long sleeved top with a purple mini-skirt that has a slit at the left side. She also has turquoise and green-striped tights, and her shoes are ankle-high boots.

In the New Power Arc, her hair grows longer and curlier, and her costume changes. Instead of her ankle boots, she receives knee-high boots. Her shirt gets modified into a tank top that displays her Guardian emblem across the chest and covers her whole stomach area. Plus, her skirt goes down to her knees and has slits at the sides. She also gets long, black gloves that stop a few inches past her elbows.

In the USA theme song, she is shown with the teal shirt and purple skirt in the beginning, but in the end of the song, as well as the episode Happy Birthday Will (where the scene was from), and various promo art for the TV series, her clothes switch colors.

Irma is a spunky, cheerful, optimistic, and humorous person. Compared to the other members of W.I.T.C.H., she is the cockiest member of the team and she often appears to be the least serious as she is known to crack jokes about almost anyone she comes in contact with. Despite her tendency to joke around when faced with a problem, she is a kindhearted person who cares about those she has relationships with.

She can often be seen using her powers for personal gain.[1] Irma can be a bit squeamish at times, and fainted when she saw Mrs. Rudolph in her true Meridian form the first time.[citation needed]

When necessary, she exhibits leadership qualities.[citation needed] Irma almost always wants to be center stage, and, depending on the person, can or can't hold grudges for long.[citation needed] She also has a big appetite, revealed by the time she devours all of Mrs. Rudolph's cookies without a care for them possibly being poisoned, unlike the other more cautious Guardians.[2] Irma can be seen as the biggest flirt and boy expert of the group.[citation needed]

Irma loves music - her idol is Karmilla[citation needed] and in the TV series, she runs K-Ship at Sheffield Institute.[3]

In the TV series, she's more snarky and sassy with a temper and is always ready to shoot down Cornelia's ego when it got out of hand and her comic personality is given to Cornelia, but Cornelia is more uptight. She is known for her temper, which could get out of hand and her into trouble sometimes, but whenever she made a mistake, she always owned up to it in time.[citation needed]

Irma also has the ability to manipulate the magical energy of water, which is manifested in the form of rays of turquoise. She can also use water for cutting objects and hold them by increasing water pressure.[citation needed]

Later, when the Guardians powers are fueled by the mystical energy used to create the Veil, they begin manifesting new, stronger powers and abilities. Irma gained the power and ability to influence people's actions, such as making her father go easy on her to avoid grounding or breaking another free from outside mind control.[4] She could not override the effects of the Horn of Hypnos or Nerissa's enthrallment spell, but when the power of those things weakened she was able to break it.[5]

Irma also displayed more control with her power over water able to freeze and evaporate it at will, dehydrating, AKA sucking the water out of beings, and creating a gigantic version of herself out of pure liquid water using herself as a nexus of this watery giant.[citation needed]

When she became one with the water dragon, she changed into a pure liquid water-like being.[6] Irma's newest power is known as Scrying, the ability to foresee her present and future in various fluids and in lucid dreams.[citation needed]

The following is a list of powers, abilities, and other talents that Irma possesses:

Besides controlling water, the Guardian also has the ability of:

Throughout the comic series, Irma is shown to be boy-crazy and looking for a boyfriend. She even proudly said that she was and always will be a "gorgeous single".[citation needed] Even before the start of the series, in the special issue The Year Before, she was shown looking for a boyfriend. She went as far as believing Jewell, who has special psychic abilities, will keep his promise that he'll tell her who her boyfriend is going to be.[7]

Like most girls in the comics, Irma has sort of a love life. Irma is the only one in the comics who never had a relationship before, but unlike the others she tried the most to get a boy's attention. This first happened when she used her Guardian form to get into a club and meeting a popular boy from school, Andrew Hornby. However he ended up trying to kiss her too soon and accidentally Irma turned him into a toad.[1] Irma tried to get his and other popular guys attention again by making her body grow. This backfired when her body almost did not change back due to almost losing her powers.[8]

Martin Tubbs had a crush on Irma and since the beginning he tried to get her attention and trying to flirt with her. Irma at first was not interested in him, believing he was a dork and a nerd. When Irma's Astral Drop promised Martin to go on a date, the real Irma was forced to go with him despite her wishes. Despite her feelings and her dislike towards Martin, she found herself enjoying it and found Martin funny.[9] Martin also helped her with her homework when Irma's grades were going down.[citation needed]

Later on, Astral Irma became so sick of Martin that she called him a dork and said to leave her alone in front of him. Because of this, Martin grew tired of Irma's behavior and decided to ignore her. When the Astral Drops disappeared Irma notices Martin ignoring her and tried to follow him and asked him to help her for homework again. However, Martin looked annoyed but still tried to be nice to her. Finally, later Irma talked to him and she told Martin to give up on them ever being more than friends. Martin understood and did not mind having a friendship with her, and so Martin became one of Irma's best friends.[citation needed]

As Irma became closer to Joel Wright, Martin started a relationship with his French pen-pal. This shocked and annoyed her. Irma also often tried to get Martin jealous with her being with Joel but it did not seem work. Irma also had a hard time focusing on Joel with Martin nearby implying she herself was starting to like Martin, or always liked him without knowing it and now with him not giving his full attention to her, she was missing it.[citation needed]

In Issue 050: It's Magical Anyway, a possible future showed that Irma has became interested in Martin who grows up to be a handsome young man.

Matt's cousin, Sean, was interested into Irma and flirted with her openly and confident. Irma however, disliked his behavior and told him off despite the fact she was blushing.[10]

Joel Wright, a friend of Matt's became close with Irma as they have many things in common, and also talked for hours about the subjects they love, music and especially Karmilla. Irma also blushes around him.[citation needed]

Though her relationship with Joel started off platonically, a mix up with a note to Karmilla made Joel think Irma was confessing feelings for him and led him to examine his own crush on her.[citation needed] Irma was at first hesitant to charge their relationship but decided to give him a chance. The two continued to hang out like good friends and while they don't explicitly state they are dating, Joel did at one point get jealous of her closeness to Martin until realizing the two are just friends.[citation needed]

During the Ragorlang Arc, Irma hosted Erin Peyton and helped her to find her missing brother, Kader. Upon meeting the older boy, Irma was immediately infatuated and he seemed to share the feeling. The brief romance ended when he returned home with Erin and she later regretted having let the chance at love slip by her.[citation needed]

In the new series, Irma reunited with a former flame, Stephen who she fell in love with on a school trip[11] and who gave her a special ring, though she lost it. She found her ring while learning he's a member of the U18 vigilante group[12] and she later revealed to him that she is a Guardian.[13] He was the only person she told.

In the TV series Irma never gets a boyfriend; though Martin still has a crush on her and she continues to have a crush on Andrew Hornby.

When Martin became attracted to foreign exchange student Sondra, Irma became annoyed with how he forgot about her.[citation needed] His overbearing crush continued to annoy her until she finally lashed out at him, insulting him harshly over the loudspeakers of Sheffield Institute, which truly hurt him. She later made her heartfelt apology and they sorted out their issues in that though he enjoys chasing her, she'll continue to reject him and both are okay with this.[3]

Irma's crush on Andrew Hornby returned during season 2, though he only started to notice her after she joins the K-Ship broadcasting station, referring to her as "Lair On the Air". He respected her honest apology to Martin.[3] After hearing Andrew tell the school that Trick or Treating was only for babies, Irma rejected the idea of going, which all her friends could tell was because oh him. Nonetheless, she bumped into Andrew while out with her brother, dressed as a pirate while he admitted to actually enjoying the holiday himself. He complimented her "costume" (really her Guardian form) and Irma's love for Halloween was renewed.[14]

When Nerissa infiltrated the school as a student and cast a love spell over the boys, Irma became jealous and had to remind herself that neither were her boyfriends.[citation needed]

Irma lives in a house with her policeman father Tom Lair, her pesky 7 year old half-brother Christopher Lair, and Anna Lair, who is her stepmother in the comics and her biological mother in the TV series. In the comics, she has a pet turtle named Leafy, in whom she confides all her secrets. 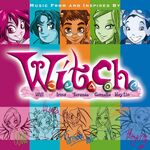 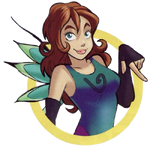