This is a list of all issues of the Comic Books.

Five human girls, Will Vandom, Irma Lair, Taranee Cook, Cornelia Hale, and Hay Lin, are appointed Guardians of The Veil, by the Oracle of Kandrakar and form the team W.I.T.C.H.. They must protect the Veil and close it's Portals from Meridian, the world on the other side of the veil, and it's tyrannical ruler, Prince Phobos.

Elyon Brown, a friend of W.I.T.C.H., is brought to Meridian by Lord Cedric as she is Phobos' younger sister and the rightful queen, though Phobos wants to drain her magical power for himself. W.I.T.C.H. ally themselves with the Meridian rebels and their leader, Caleb, to put Elyon on the throne.

4. The Power of Fire

8. The Black Roses of Meridian

10. A Bridge Between Two Worlds

12. The Challenge of Phobos

Issue 008: The Black Roses of Meridian

Issue 010: A Bridge Between Two Worlds

Issue 012: The Challenge of Phobos

The Guardians must face an old enemy of Kandrakar – Nerissa, the corrupted ex-Guardian and the previous Keeper of the Heart. After being stripped of her powers and imprisoned, when she is accidentally freed, she seeks revenge against Kandrakar. When Caleb is kidnapped, the Guardians must face Nerissa along with her four Knights of Vengeance.

15. The Courage to Choose

19. The Other Side of the Story

Issue 015: The Courage to Choose

Issue 019: The Other Side of the Story

A Gust of Hate

A Crisis on Both Worlds

Main article: Arc 3: A Crisis on Both Worlds

Taranee went on strike because she felt that the Oracle is using them to carry out his missions and sentences. Orube, joins the remaining Guardians on their new mission to defeat a new enemy; Ari, the powerful lord of Arkhanta, and they must prevent him from rising up and destroying the Oracle. Ari's son, Maqi, suffered from a strange disorder since birth and the Oracle had refused to help Ari cure his son. Angered and blinded by rage, Ari captured a banshee, named Yua, and tried to use her wish-granting power to oppose the Oracle and Kandrakar.

Meanwhile, more problems arise on Earth. Interpol discovers the secret of the Guardians and wants to capture them and use their powers for their own mysterious intentions and the girls' Astral Drops decide to rebel after months of being taken advantage of by the Guardians.

30. The Chamber of Tempests

31. The Voice of Silence

34. The Scent of Freedom

Issue 030: The Chamber of Tempests

Issue 031: The Voice of Silence

Issue 034: The Scent of Freedom

Trial of the Oracle

The members of the Congregation are questioning the Oracle's recent actions, and he shocked everyone by putting himself on trial. The Guardians are called in to recall his recent unsatisfactory deeds and he was later found guilty by Endarno and was banished back into his home world, Basilíade.

Back home in Heatherfield, Will confronted Orube and Matt, while Principal Knickerbocker goes to drastic measures to raise the girls' grades at Sheffield.

In Kandrakar, the Council has elected Endarno the new Oracle, who began to make the life of the Guardians difficult by trying to prove to the Congregation that they are too young and immature. He also convinced the Congregation that Queen Elyon is dangerous and unfit to rule Meridian. Many times he tried to get the Guardians to arrest their old friend and bring him the Crown of Light.

Endarno is someone else than he appears to be... an old enemy coming back for revenge and a bigger thirst for power. Elyon and Yan Lin discovered that Endarno is actually Prince Phobos who’s been using Endarno’s body in his new quest for more power and vengeance.

38. Desires of the Heart

39. On the Wings of Remembrance

46. The Power of Courage

Issue 038: Desires of the Heart

Issue 039: On the Wings of Remembrance

Issue 046: The Power of Courage

The Book of the Elements

The Five Elements themselves have something in store for the girls: their powers are growing even stronger and stronger. Each Guardian has discovered new and much stronger magical abilities, yet their elemental powers are going out of control. Even the Triumvirate of Kandrakar does not have full understanding about it.

At the same time, Cedric is disposed of his magical strength and power and gets a second chance from the Oracle. He returns to "Ye Olde Book Shop" to live a decent life, under supervision from the Guardians. Nevertheless, he searches for a useful resource to regain his powers in hopes of getting revenge on the Guardians. He finds his luck in the Book of Elements, written by Jonathan Ludmoore, an alchemist from Meridian. He experimented on the elements but it trapped Ludmoore in his own book and released all five elemental stones throughout the city. After Matt was swallowed by the Book of Elements, the Guardians must cooperate with Cedric in order to save Matt.

49. Between Dreams and Reality

57. The Isle Of Enchantment

61. The World Inside The Book

Issue 049: Between Dreams and Reality

Issue 057: The Isle Of Enchantment

Issue 061: The World Inside The Book

When Hay Lin stayed over at the Lyndons' home, she meets Karl and Tecla Ibsen, an elderly couple who appeared to have a connection with Eric's new school. Karl tells Hay Lin about the Ragorlang, a monster that absorbs the thoughts, the voices, and the sounds of its victims. Coincidentally, a few students at Eric's school are getting inactive as if they had lost their youthful strength. The same evening, Hay Lin gets attacked by a Ragorlang and was saved just in time by the other Guardians. Soon they discover who's behind the new threat: Tecla Ibsen. She wanted to be young and beautiful again and used her magical ability to conjure up and control the Ragorlangs, ordering them to steal the youthful strength of the teenagers by absorbing their thoughts and voices.

The Guardians must face an ancient enemy – the Dark Mother! She was once Meter, the Queen of Spring, and made flowers bloom beneath her feet. But when she became tainted corrupted, she transform into Dark Mother and attacked Kandrakar. She was defeated by the Elemental Queens of Water, Fire, Air, and Quintessence. She then was cast off into the dark void where she continued to wait patiently in chains.

In silence, Dark Mother sent a seed and planted it in Kandrakar where it will served as her infiltrator against the Fortress of Light. The Guardians received their New Powers, making them stronger and giving them new abilities and new outfits. Matt now served as their new trainer and mentor after being recruited by the Oracle to prepare them for their upcoming battle against Dark Mother. One by one, The Guardians found the root of their elements and obtained control over their new powers. Meanwhile, Dark Mother escaped and set off to take over Kandrakar. Thanks to her tree which she had planted beforehand, Dark Mother enslaved the minds of Kandrakar, except for Yan Lin. The Guardians later faced her in one last battle and Dark Mother was sealed in a stone tomb. Oracle Himerish relinquished his place to Yan Lin who foresaw the coming threat and left without saying good-bye.

The Guardians must find and teach the magical people of Heatherfield how to fully control their new abilities. Oracle Yan Lin assisted them by giving them new weapons to help greatly strengthen and magnify their powers and abilities as well as the key to the W.I.T.C.H. Van, a special on-the-road-school which houses five magical laboratories connected to each Guardians’ elements, personalities, and skills. Kandor, a member of the Congregation is sent to be their new bus driver and care-taker.

Meanwhile, a new enemy is watching their every move: Foreman Takeda the CEO and scientist of Takeshita Inc. Takeda vowed to destroy all magic because he believed that it is responsible for his daughter’s illness.

While looking for Liam and William in the Fast World, the Guardians encounter the malicious ruler Arkaam, the White Queen, who wished to rule all of the Fast World under her tyranny and possessed a deep desire to kill the Black Queen. It is revealed that the identity of the Black Queen is Mariko’s consciousness .

In the confusing of their escape, Liam was killed by the White Queen after she stabbed him with her sword. Although successful in bringing William back, Will and her friends are horrified that the White Queen and her army had followed them to their world. In their last battle, invading White Queen and her army were dissipated by the Guardians’ powerful sound frequency. After hearing Mariko’s accusation and Shinobu’s forgiveness, Takeda forgot his vendetta and rejoined his family.

Starting from issue #97 of the previous saga, each issue has its own story. The Guardians now faces their daily problems from families, friends, and school. The stories ranged from facing their first day of returning to Sheffield Institute to finding out more about both of their parents’ pasts and abilities. At the same time, they must face several new enemies who wanted to destroy them. Many of these villains included the Runics, a group of five evil wizards who control the dark powers of the elements; and Nihila, the Queen of Darkness, who desire to weave and control everyone’s destinies with her magical Loom.

This saga also introduced new missions where the Guardians must assist the beings of the natural worlds; from listening to the voice of the Earth to helping Mareeve, the Saarineen from marrying King of the Sharks, Orristurr. Later on, the stories ranged from Dean's parents, returning to Hay Lin and her family celebrating Chinese New Year.

Issue 105: One Letter From a Dream

Later on, the comic series introduces several new villains including Lady Giga, Lady Crash, and Lady Kimikal. The Guardians must find a way to stop their new malicious opponents without endangering the people around them.

The W.I.T.C.H. Girls are given the choice to give up their powers, or keep them. If they decide to keep them, they must do 3 tests without the use of magic to prove themselves worthy; should they succeed, they'll become Magical Sovereigns, if they fail they'll lose their powers and become trapped on the world they're being tested in.

Issue 131: The Magic of Emotion

Every year, the W.I.T.C.H. comic book releases a special issue that tells a unique story about each of the Guardians of the Infinite Worlds, such as a "what if" story in an alternate reality) or a deeper look into their own lives.

Elyon: Return of the Queen 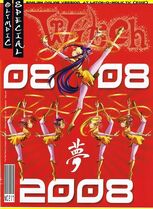 Retrieved from "https://witch.fandom.com/wiki/List_of_W.I.T.C.H._issues?oldid=39284"
Community content is available under CC-BY-SA unless otherwise noted.