Mr. Huggles, simply called Dormouse in the comics, is Will Vandom's pet in the W.I.T.C.H comic and Matt's pet in the animated series with the same name.

In the second issue, The Twelve Portals, Will rescues the dormouse from Uriah and his gang, who are bullying it. She meets Matt, who gives her some advice on how to care for him and reassures her that they are "made for one another" even though Will is worried she won't know how to look after him properly.

Will doesn't name the dormouse, simply referring to him as "Dormouse".

Dormouse remains a faithful pet to Will, often consoling her in times of crisis and sadness. Even though he is naughty, eating papers and an entire jar full of cookies, he is a loyal companion.

He is often startled and confused by magical events that occur around Will, such as her transforming into a Guardian and seeing her and her astral drop in the same room together.

In issue 8, The Black Roses of Meridian, Dormouse accompanies Will on her adventure to Meridian. He aids her in a battle against Cedric by biting his tail.

Sadly, in issue 26, Blackmail, Dormouse is accidentally hit by a car. Will rushes him to Mr. Olsen, Matt's grandfather, but he is put to sleep. Matt consoles her for her loss afterwards and kisses her on the cheek.

Matt hands the doomouse to Will

"You are clearly made for each other"

Doormouse with Will in Meridian

Will realizes she hasn't named the doormouse 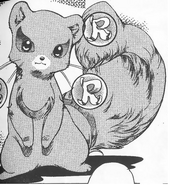 Dormouse/Mr. Huggles as he appears in the Manga

Mr. Huggles (on the left) in his Khor form
Add a photo to this gallery

In the animated series, Matt gifts her the Dormouse named Mr. Huggles. However Will's mother doesn't allow her to keep him, and so she asks Irma to keep an eye on him while she attempts to talk her mother around to the idea of her having a pet. However Irma gets attached and Will can't bring herself to take him back.

Mr. Huggles is eventually passed on to Hay Lin after Irma is unable to keep him. During his time with Hay Lin, he inspires the attack plan on Elyon's coronation after Hay Lin watches him run through his pipes.

Mr. Huggles gets out of his cage and runs amok in the Silver Dragon leading Yan Lin ordering Hay Lin to get rid of him, leading to him being passed onto a reluctant Taranee. However this is short lived as her mother objects to him being in the house, partly due to her husband's allergies to fur. Cornelia is then asked to look after Mr. Huggles, however this too is short lived after Cornelia's sister Lillian lets Huggles out to play with their cat Napoleon, causing the two to cause a mess. During the final Battle with the Annihilators, Elyon takes care of him, though when going to return him he once again escapes his cage. Matt offers to take Huggles back.

When Matt is kidnapped by Nerissa, Huggles is taken as well, and he is turned into Khor, the Destroyer. Much to Nerissa's chagrin, Khor remains loyal to Matt, recognizing him as his owner. When Matt was turned into Shagon, this loyalty remained. As one of the Knights of Destruction, Khor was a formidable foe for the Guardians, drawing his power from the anger they felt.

When Matt finally manages to defeat Shgon from within, he commands Huggles, meaning his loyalties were always to Mat and not Nerissa. Shortly afterwards, Nerissa drains the powers of the Nights of Destruction, returning Matt and Huggles to their original forms. Huggles stays with Will as Matt performs with his band.

Huggles along with Matt and Cornelia's cat Napoleon becomes a Regent of Earth. This allows him to once again assume his Khor form, though his powers are now fueled by the Heart of Earth rather than his enemies feelings of anger.

Differences between Comic and Animation

The dormouse plays very different roles in the comic versus the animated series.

Retrieved from "https://witch.fandom.com/wiki/Mr._Huggles?oldid=34750"
Community content is available under CC-BY-SA unless otherwise noted.