Peter Lancelot Cook is Taranee's older brother, the son of Theresa and Lionel Cook. He currently attends a college and lives away from home with three of his friends in a small apartment.

Peter is a very easygoing guy that doesn't let much upset him and always tries to see the brighter side of things. He is very perceptive of others' feelings and tries to cheer them up if he senses that they're down.

He is fiercely protective of his loved ones and would do anything for them. If they needed a shoulder to cry on, an ear to listen or whatever else, he is always there. He is very dependable and would drop everything and come to a loved one's side if they needed him, something he would do even if they hadn't asked. Something which he did for Taranee.

Peter was born to Theresa and Lionel Cook. A few years later, his parents adopted his younger sister, Taranee. He was not aware of this fact until years later.[1] Before moving to Heatherfield, they lived in a town called Sesamo (called Sesame in the English translation) filled with mountains.[2] During the summers in Sesamo, Peter would teach Taranee how to ski.[3]

Peter was very excited to move to Heatherfield as he would get to experience the town's surf, something he could never try in his hometown of Sesamo.[2] When he arrived, he met a girl named Irene. Peter enjoyed hanging out with her and they dated for a while. The pair broke up, however, and they eventually lost contact with each other.[4]

At the inauguration for the School Olympics, Peter and Cornelia walked through the festival, hand in hand, and discussed Taranee's participation in the festival.

Heatherfield citizens gathered at the beach to watch a solar eclipse. During the solar eclipse, Heatherfield was exposed to some of Kandrakar's power, allowing the wishes of everyone to be granted. Peter's (and Cornelia's) wish came true when Cornelia enthusiastically asked him out, which he agreed to. Unfortunately, he forgot all about it when Heatherfield was returned to normal.

The next day, during school, Peter approached Cornelia while she was making photocopies. He then used the photocopier to print a note. When Cornelia went to pick it up, she noticed it was actually an invitation to go on a pizza date with him and she happily agreed.[5]

Peter took Cornelia to Karmilla's one-night-only concert, but the date was nothing but awkward and silent. As Peter was about to confess his feelings to Cornelia, he, along with everyone else attending the concert, was unwittingly attacked by Folkner and his Ragorlangs. Unbeknownst to everyone though, the girls were able stop Folkner.

After being freed from the Ragorlang's grasp, he tried to talk to Cornelia, but she had other thoughts. Cornelia grabbed his shirt and pulled him into a kiss, which he happily reciprocated.[6] The pair then began to date each other.

Peter started looking for and found a small two bedroom apartment with three of his friends; Stan, Roger and Richard. Peter withheld the information for several months, waiting for the right time to announce it, but wasn't ready to break the news to his mom yet, so he confided in his little sister instead. Unbeknownst to him though, his mother was listening to everything outside his door. She entered his room and they talked about him moving out.[7]

Over the following days, Peter packed his stuff in boxes and received help from several people, including Taranee and Cornelia. Taranee made it known to him that she would miss him, and he jessed that he wasn't going to move out so quickly.

Peter spent his last days at home packing, cleaning his room and hanging out with his girlfriend. Since Taranee had gone away to camp, he had Cornelia come over to help. As Peter did work, Cornelia looked through his old photos and found one of his past girlfriends, Irene, but he assured her that that relationship ended a long time ago.

Later on, Peter met Cornelia at the movie theater for a date. He quickly noticed that Cornelia was feeling down, and he reassured her that things with Irene were long over. Cornelia then mentioned that she was reminded of her first love, Caleb, but reassured Peter that she loved him. Hearing her words, Peter dragged her to the photobooth for them to take pictures and remember that moment.

On the last day of vacation, Peter and Cornelia had a date on a rooftop, stargazing. They laid out blankets to sit on and watched the stars go by, with soda drinks on the side.[4] Peter then moved out over the following days.

As soon as the four boys moved in, they created a pigsty in their home. Clothes, dirty laundry, and food was strewn about their floors and walls. The boys, however, didn't seem to care much.

Peter kept in touch with Cornelia with hand-written letters, even though both of them had computers and cellphones, as they deemed it romantic. He would constantly brag about his girlfriend to his roommates.

Shortly after settling in, he received a call from his father about Taranee and her discovery of the fact that she was adopted. The news came as a surprise to Peter and he rushed back home to be by Taranee's side. He confirmed to her that, blood or no blood, they would always be siblings.[1] As soon as the dust settled, Peter went back to his apartment.

Peter went on a vacation with his family, friends, and girlfriend. While teaching Cornelia how to surf, a gust of wind blew them off their board. Peter saved Cornelia from being pulled under. Later, Peter performed a set on stage with Cobalt Blue.[8] After the holiday was over, he went back to his apartment.

Peter spent the summer with his friends and family. At the end of summer, Peter, Matt, and Stephen planned a night to watch the stars, on the beach, with the girls. Peter picked up supplies alongside his sister and Hay Lin, but he got carried away with the decorations and furniture, resulting in him being chastised by Taranee. Later, as he was preparing to leave for the beach, he found that his tires had melted into the road (thanks to Taranee). Despite having to throw his original plans out the window, he still enjoyed the stars with his friends while cuddling with his girlfriend.[9]

In the TV series Peter meets Cornelia in the episode "B is for Betrayal." He doesn't really notice her until Cornelia comes back from Meridian still with her Guardian body (but without wings and the outfit). Taranee tells Peter that this was Cornelia's older sister (Lillian). In "F is for Facades" the rest of the group find out that they've been dating. Taranee is not very excited about their relationship near the end of the episode Cornelia dumps Peter and returns to Caleb.

Peter loves his little sister, Taranee, and would do anything for her. They have a strong brother-sister bond and get along really well. He is known to be protective of her and likes to see that she is happy.

Peter took an instant liking to Cornelia when he saw a distorted image of her.

In the TV series Peter's only main episode is F is for Facades. He had cameo appearances in B is for Betrayal in the beginning and end and a quick appearance in J is for Jewel after being targeted by Shagon.

In the comics Peter has more appearances and his relationship with Cornelia actually goes ahead and is a lot more detailed, though in the TV series he ends their relationship after one day of dating and he thought he was dating Cornelia's "older sister" Lillian though the name got mixed between Cornelia's younger sister Lillian so Cornelia then told him "Lillian" was her cousin.

In the comic series Peter is more involved with his sister, giving her relationship advice, being there for her after he found out Taranee was adopted and being a caring brother. Though in the TV Series he hardly appears in the TV series this is probably because, the series had to get to the point whilst the comic writers could take their time and add more detail. 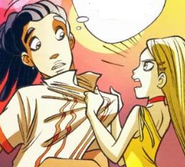 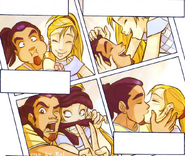 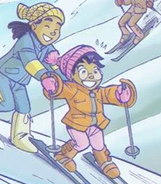 Add a photo to this gallery

Retrieved from "https://witch.fandom.com/wiki/Peter_Cook?oldid=51338"
Community content is available under CC-BY-SA unless otherwise noted.