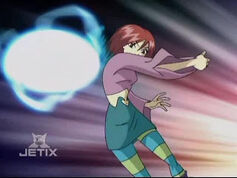 "Quint essence, the fifth element. The ancient sages described it exactly like electricity. They believed it could be found in lightning. But they also called it the stuff of life, like bio-electricity. Quintessence has the power to make things come alive."

-Taranee explaining the nature about Quintessence to her fellow Guardians in Episode 37.

Quintessence (also known as Aether), is the fifth element controlled and manipulated by the fifth and leader of the Guardians of the Veil. It contains pure life energy.

Quintessence (Aether) is the fifth element that binds the four classical elements: water, fire, earth, and air together. It is the strongest and most powerful element in the series, apart from the element of pure Light, which is bestowed upon Elyon, and one of the most diverse, regarding it's effects. Another term for Quintessence would be Aether, as it is commonly known to be in Greek mythology.

Aether is known as a very holy element, the material that God used to create the universe as we know it, and therefore, the essence of all living things. Quintessence allows the Guardian who possesses it a wide range of mystical abilities and talents. For instance, she can open and close portals in time and space, unite the four elements of nature, and bestow life just as easily as she can take it away with its destructive force.

The user is also granted an assortment of powerful psychic abilities and greatly strengthened physical attributes. Such great power and strength placed in the wrong hands could lead to total disaster, as shown with Nerissa, a Guardian who became drunk with the immense power that the Heart of Kandrakar granted her as the leader of the Guardians.

Quintessence in the TV Show

Quintessence/Aether is controlled and manipulated by Will Vandom, one of the new Guardians. Nerissa, the previous Keeper of the Heart, was also endowed with this extraordinarily powerful elemental ability and is far much more experienced in using it to its full and maximum potential. Unlike the Comics where their powers are coloured Pink/Fucia in the Show the abilites of the Heart of Kandrakar are restricted to this colour whilst the abilities gained from Quitessence are blue.

Besides control over Quintessence/Aether, a Guardian leader's standard abilities are:

Customarily, the Guardian of Quintessence is selected as the keeper of the Heart of Kandrakar (unless they become corrupt, like Nerissa), thus enhancing or adding to their elemental abilities, such as:

Retrieved from "https://witch.fandom.com/wiki/Quintessence_(element)?oldid=29192"
Community content is available under CC-BY-SA unless otherwise noted.