Season 2 is the second season of the W.I.T.C.H. TV series. It consists of twenty-six episodes which aired between June 5, 2006 and December 23, 2006. This season corresponds to Arc 2: Nerissa's Revenge of the comics.

SIP Animation produced season 2 at a new and different studio than the one previously used for producing season 1. This is the final season of the TV series.

For the international versions of W.I.T.C.H., a new opening sequence was used, still using the W.I.T.C.H. Theme Song. Like the season 1 opening sequence, this one shows the girls and their powers in a "story version" with unique footage, but with this one introducing the characters and villains of season 2, as well as introducing Will's new power over quintessence.

A new opening was not required for the US version of W.I.T.C.H. Instead, they used the season 1 opening, which uses action clips from some season 1 episodes and scenes form the W.I.T.C.H. demo reel. 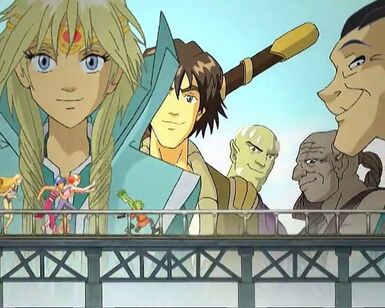 She then used her powers, as well as the reasorbed powers of her Knights of Destruction to resurrect the former Guardians (C.H.Y.K.N.) restoring their full powers, youthful Guardian appearances and Cassidy's life. Nerissa then trapped her former fellow Guardians' in her seal, now granting her the abilities to manipulate all five elements: water, fire, earth, air and quintessence and became five times as powerful as W.I.T.C.H.

This didn't last long, as Prince Phobos took the Seal of Nerissa, with Nerissa trapped inside, and renamed it the Scepter of Phobos and took control of Meridian. Prince Phobos, Lord Cedric and his henchmen then battled W.I.T.C.H. and their allies on Kandrakar. Prince Phobos lent Lord Cedric too much power, causing him to grow bigger and bigger and eventually, eat Prince Phobos in order to have his power all to himself and Miranda.

Lord Cedric then took the battle to Heatherfield and was defeated by W.I.T.C.H., who used their power to an absolute zenith, while Miranda was defeated by Caleb, Blunk and Sandpit. In the end, Nerissa was trapped in her own fantasy within the Seal of Nerissa, Elyon returned to power and the members of W.I.T.C.H. spent the rest of the summer with their boyfriends. The ending of the season set up a potential adaption of Arc 3: A Crisis on Both Worlds with the introduction of the new computer instructor Professor Raphael Sylla.