View source
This article is a stub.
You can help W.I.T.C.H. Wiki by expanding it.

Tom Lair is Irma and Chris Lair's father. He is married to Anna Lair.

He is a party animal and a sports fan[citation needed] who hates when the garage gets dirty[1] and has little patience for fussy people. He can be nice and mean towards Irma at times. He is very strict and expects his children to be clean well-behaved and get good grades. Tom is an expert in interrogations, as Irma puts it. He is a little more aware of Chris' bad behavior than his wife.[citation needed]

He works as a police officer, and has been seen working with Joel McTiennan and Maria Medina.[2] He was seen doing patrol duty, where he was almost killed by Cedric.[3]

Images of Tom Lair from the comics. 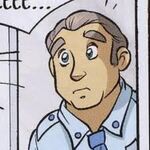 Images of Tom Lair from the TV series.